A couple of musical sisters got together on Saturday night at Kelowna Community Theatre in the name of cultural exchange and educational enhancement.

No, I’m not talking about the Pointer Sisters, the Andrew Sisters, or disco divas Sister Sledge. I’m referring to a so-close-and-yet-so-far tale of two cities – Veendam, the Netherlands and Kelowna. Hold onto your tulips and windmills, these two have had an ongoing sister-city relationship for 37 years centered around school-age students and adults visiting each other’s city in order to experience and celebrate diversity. 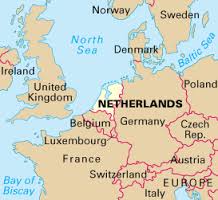 This gal-pal arrangement was originally established in recognition of the role played by the BC Dragoons and Kelowna-area troops in the liberation of Holland in 1945. In May 2015, on the 70th anniversary of the liberation of The Netherlands, the cities of Kelowna and Veendam mutually decided to paint the official sister-city relationship with a broader brush. One result of this renewed commitment was Saturday night’s symbiotic Celebration of Canada and The Netherlands. 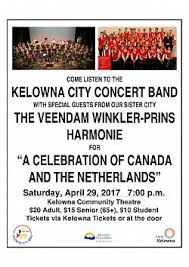 Live from Veendam was the Winkler-Prins Harmonie, a community band with connections to the Winkler Prins Public School. The group (harmonie is Dutch for wind band) is an ensemble of 45 musicians comprised on students, alumni, former teachers, and ex-staffers. Band members range in ages from 12 to 68. It’s true, the WPH music director made sure to introduce two 12-year-old boys in the reed section and one 68-year-old Dutchman tooting amongst the horns.

The home team in this foreign-exchange musical montage was the Kelowna City Concert Band. The KCCB, also made up of students and adults of all ages, has its own long history – it was formed in 1894 and pre-dates the City of Kelowna by 19 years. My question, what was the name of the group back in 1894? I’m guessing it was something more regional than the current moniker?!

In the first half of the concert, the Winkler-Prins Harmonie took the stage and performed seven numbers. Highlights were song #1, Hallelujah by Leonard Cohen, medley #4, Postcard from Amsterdam (Amsterdam has 1,500 bridges and is best toured by bicycle) that featured a student playing actual bicycle bells, and Concerto #5, several favorites from the Broadway production of The Lion King.

After intermission, conductor Dennis Colpitts brought the Kelowna City Concert Band out for four concertos, two of which played tribute to Dutch composers. Then came a short break to bring back the Winkler-Prins Harmonie so the sister-city groups could play as one in the same sandbox. They performed two striking melodies before packing up their tubas and timpani.

Big Finish – during a music break, a chaperone from the Dutch contingent took to the microphone and raved about his group’s six-city tour of BC and Alberta. Two things he cited, the beauty of Canada (The Netherlands is below sea level and has zero mountains) and the non-stop hospitality. These statements brought the loudest applause of the night.